When shopping for a budget laptop, you’ll most likely encounter Intel CPUs from its Pentium or Celeron series, and it’s quite rare to see a Core series processor at around the Rs. 20,000 price point. Last year, we rounded up some of the best laptops under Rs. 20,000 with Windows 10, which meant and we had to compromise a bit on the CPU front with all of them.

But what if you don’t need Windows preinstalled? Can you trade in the software for slightly better specifications without having to raise your budget? iLife Technologies Inc. has launched its low-cost laptop called the Zed Air CX3 in India, and it has been available through online retailers for a while now. According to the company, the laptop is being targeted at first-time buyers and college students in Tier II and Tier III cities in India.

Priced at Rs. 19,999, the Life Digital Zed Air CX3 boasts of an Intel Core i3 processor, which we don’t see too often at this price. This piqued our interest, and so we decided to check this low-cost laptop out for ourselves, to see if it’s actually worth buying.

Budget laptops rarely have much to boast about when it comes to design and the Zed Air CX3 is certainly not an exception. It’s built entirely of plastic; silver on the outside and black on the inside. There’s an iLife logo in the middle of the lid and that’s about it. Build quality is quite average too, with lots of flex on the lid and bottom panel when you apply a little pressure. The laptop is heavy too at 2.5kg, which can feel like a burden if you plan on carrying it around a lot.

Life Digital has tried to mask the actual thickness of the laptop by making the sides angular. While this does work to an extent, you can’t see any of the ports unless you tilt your head all the way to either side. This gets annoying quickly when you need to plug anything into the ports.

Speaking of which, there are a total of three USB ports — two USB 3.0 Type-A and one USB Type-C port. The latter can only be used for data transfers and not for outputting a video stream. There’s also a full-sized HDMI 1.4b port, an Ethernet port, a headphone/microphone combo socket, and a microSD card slot. Our unit also had an unmarked cutout on the left side, seemingly for another port but this space was empty. It’s present on the product photos on the company website but absent in the images in retail listings, which we found strange.

The spacing of the ports is fine but we really wish that iLife had gone with a full-sized SD card slot. Given the size of this laptop, we don’t see any reason it couldn’t have been included.

Opening the lid to the all-black interior, we have a 15.6-inch IPS display with a 1920×1080 pixel resolution. The screen has a matte coating so reflections aren’t a big problem. Colours look fine but the brightness isn’t very high, so even indoors, we often found ourselves using this laptop with maxed-out brightness. 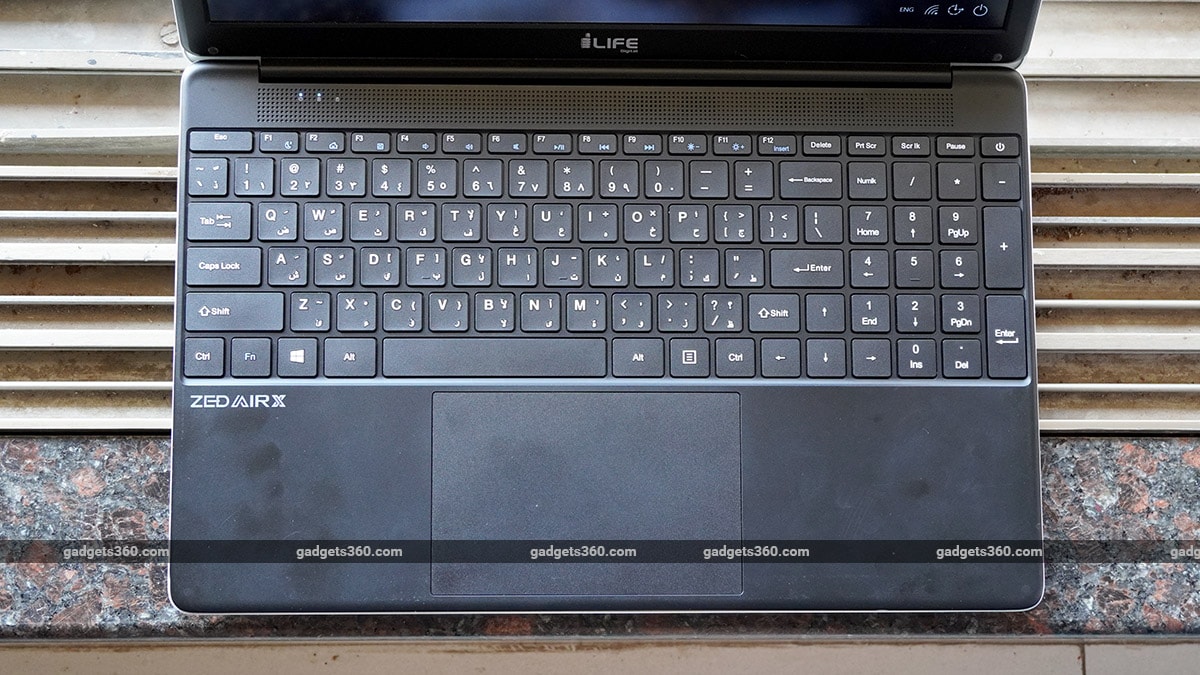 The keyboard has enough room for a full-sized number pad. The chiclet keys have decent travel but feel mushy, as there isn’t much in terms of tactile feedback. The palm-rest area is spacious and there’s a massive trackpad in the middle of it. Normally, this would make us very happy, but sadly the touch response of the trackpad is very finicky and it would often register a tap over a folder or file when all we wanted was to drag the cursor over something else. The trackpad buttons also have poor tactile response.

Overall, the Zed Air CX3 doesn’t make a great first impression but we’re not completely surprised, considering its price. You can ignore the Arabic lettering on our keyboard, as this was a replacement part that the company’s service representative installed after we had an issue with our review unit’s power button malfunctioning. The Indian retails units only have English lettering.

A quick look at iLife’s product page for the Zed Air CX3, shows that it comes with either Windows or FreeDOS, however, the models sold in India will only ship with DOS, which means you’ll have to install Windows or Linux yourself. Our review unit came with Windows 10 Pro preinstalled, just so we could run our tests on it. If you do plan on installing Windows 10 yourself, iLife provides all the necessary component drivers on its product page. 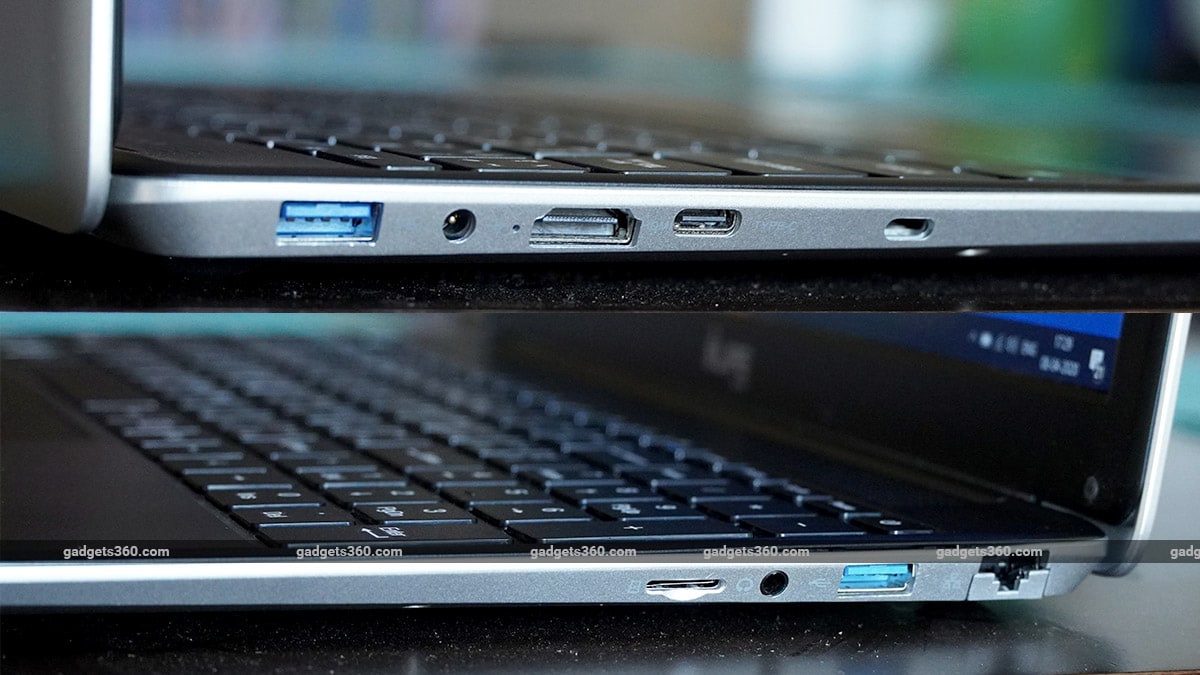 The Zed Air CX3 is only available with one CPU option, and that’s a dual-core Intel Core i3-5005U. This is a pretty old CPU from Intel’s 5th Generation ‘Broadwell’ family, but its performance might surprise you, as we’ll explore in the next section. In India, the Zed Air CX3 is sold with either 4GB or 8GB of DDR3 RAM, with the storage staying the same at 1TB. We have the 4GB version for review. CPU-Z shows us only a single, unused RAM slot which could mean that the included RAM is soldered directly onto the motherboard.

You get a VGA webcam above the screen but there’s no LED indicator to show when it’s being used, which is a little scary. The Zed Air CX3 also has a 5,000mAh Lithium Polymer battery.

The Zed Air CX3 performs decently once it’s up and running. Windows 10 takes a while to boot, and multitasking between many apps can be sluggish, with just 4GB of RAM. If you limit your usage to a few apps at a time, you should be fine. The trackpad can be finicky but this can be fixed simply by using an external mouse. The display offers decent viewing angles and colours have good saturation, which makes watching videos enjoyable. However, the speakers are quite terrible. The cutouts are placed above the keyboard, but even at full volume, the treble and mid-range are weak and tinny.

For testing the CPU performance, we ran our usual suite of benchmarks. Cinebench R20 returned single and multi-core scores of 192 and 473 respectively, while POVRay took 10 minutes, 25 seconds to render its standard ray-traced scene benchmark. Switching to PCMark 10, we got 1,881 points in the Express suite, and 3DMark Fire Strike returned 518 points.

Real-world tests ran decently too. Compressing a 3.24GB folder of assorted files took 9 minutes, 31 seconds; encoding a 1.3GB AVI file to H.265 MKV took 4 minutes, 59 seconds; and rendering the BMW test scene in the Blender app took about 32 minutes to complete. Other than its relatively weak integrated GPU, the Core i3-5005U is still good enough to score slightly better than most of the recent Intel Celeron and Pentium CPUs that we tested for our sub-Rs. 20,000 laptop guide. 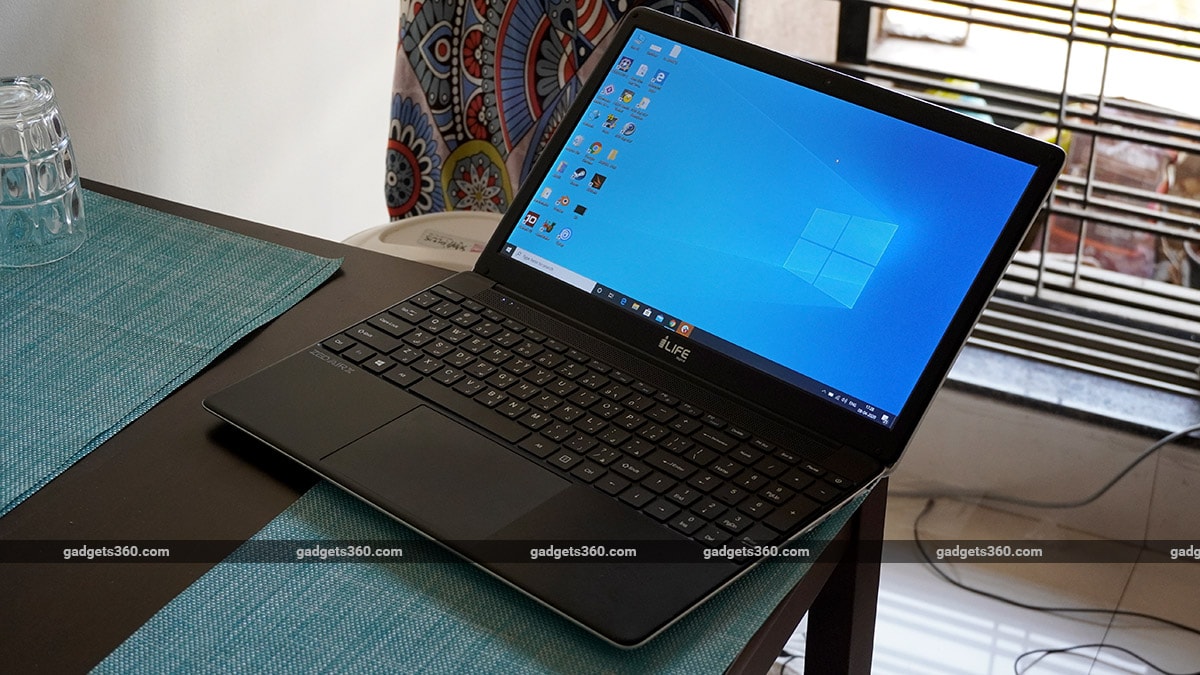 This laptop can handle simple games from the Windows Store, but not much else. We tried Far Cry 5, since it’s based on a highly scalable engine, but even at its ‘Low’ graphics preset and running 720p resolution, it couldn’t run the built-in benchmark and kept crashing to the desktop. When stressed, the bottom of the laptop gets slightly warm but we never felt it get too hot.

Battery life is alright but we think it could have been better. Our Battery Eater Pro test ran for 1 hour, 51 minutes, which is not bad but for a 15.6-inch laptop, we expected better. With everyday usage, battery life was under five hours on average, which means that one full charge is not going to last you a full work day.

The Life Digital Zed Air CX3 is one of the few laptops at this price point to offer a Core i3 CPU, albeit from a much older generation. Even so, we found that this Broadwell chip still delivers enough raw power to hold its own against more recent Celeron and Pentium offerings.

However, this laptop also has many shortcomings, which makes it hard to recommend. The build quality is below average, there’s no full-sized SD card slot, the trackpad isn’t very accurate, and the keyboard doesn’t have good tactile feedback. To add to these woes, the webcam is also mediocre and battery life could have been a lot better. Let’s not forget that Life Digital isn’t exactly a household name, and there is competition from the likes of Dell, HP and Asus in the same price range.

We feel that Life Digital should offer an option with Windows preinstalled, since many users won’t want to bother with having to install the OS themselves. For those users, there are plenty of other options around the Rs. 20,000 price point which fulfil that need nicely.